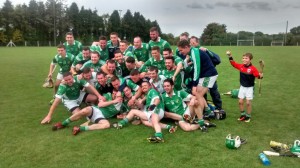 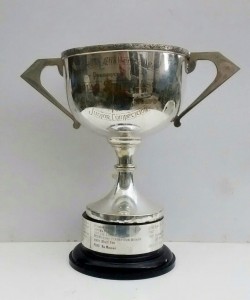 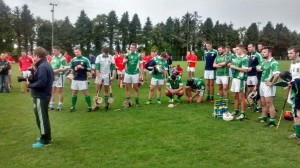 Donaghmore Ashbourne 3-13 Trim 3-10  Donaghmore/Ashbourne’s intermediate hurlers finished off their season with silverware, capturing the Brian Smith Cup for the second time in three years after a thrilling 3 point victory over Trim in Klimessan on Saturday.  In what was a tense game throughout, goals from John Broderick, Cian Field and Martin Quinn were crucial to the Moors victory.  On a perfect evening in Kilmessan it was Quinn who got the scoring underway from the throw in, getting the ball just inside the 45 yard line and striking over. Trim responded almost instantly off the hurl of Michael Cullen, and backed that up after indiscipline from the Ashbourne half back line awarded Arnie McGee two easy frees.  As they have done on so many occasions this season however, Ashbourne hit their scoring burst, putting 2-3 up within the next fifteen. Davey Carey pointed from a free and was then a key part in the build up to Broderick’s goal. Andy Byrne won the sliotair in midfield, and found Danny Deery in space, his offload to Stephen Meagher left the veteran with just enough time to pick out Carey. The resultant flick was perfect for a rampaging Broderick to drive it past Brendan Murphy.  McGee responded with a point from play, but that was quickly chalked off by Byrne and Carey to restore the three point lead, which was doubled after a fantastic goal by Field. The corner forward turned his man and headed for the posts before giving hand pass to Carey. His low shot was was excellently saved by Murphy, but he could do nothing as the rebound flew up straight into Field’s path, the 19 year old having continued his run.  That goal seemed to wake the Boynesiders up, firing back with a goal of their own from Cullen after a great pass from David Rennick, and popping over two more scores from Massey and Conroy. Carey and McGee traded scores, but Ashbourne finished stronger after points from Meagher and another from Carey, his fourth of the half.  The reverse would happen at the start of the second half, Colm Doyle sending his charges out with a clear message, and they reacted by scoring 1-1 within the opening 5 minutes of the second half, Cullen pointing and then McGee blasting the ball past Sean Benville from close range to take the lead by one.   But when a side goes behind, the captain needs to step up, and he did for Ashbourne, as Quinn went on a trademark mazy run forward from midfield, finishing into the corner from the 21 past a helpless Murphy. Carey drove over two more scores, but Trim dug deep to find the net again, Cullen grabbing his second after good work from McGee. Arney added another point, which brought the sides level with just over ten minutes left. Ashbourne again took the lead through Field, and this time they would not relinquish it. Another Carey 65 put two between them, before a huge long range effort by Byrne sailed through the posts. McGee would respond with another point, and it took two great saves by Benville to make sure the Moors didn’t fall behind again. Carey would round off the scoring from play to cap off an amazing team effort.  Don/Ash team: 1. Sean Benville 2.James McKeown 3. Matiú Baxter 4. Darragh Walsh 5. Aonghus O Maoilmhichíl 6 Conor Carey 7 Sam Benville 8 Martin Quinn (c, 1-01) 9 Shaun Byrne 10 Andrew Byrne (0-02) 11 Stephen Meagher (0-01) 12 John Broderick (1-00) 13 Danny Deery 14 David Carey (0-08, 4 f 2 65’s) 15 Cian Field (1-01). Subs: Sean Robinson and Paul Finglas for McKeown and Baxter (30), Graham Byrne for Deery (47), Conor Walsh for D.Walsh (51), Colm Randle for Sam Benville  Unused subs : David Kent, Terry Bruton, Sam Murray, Luke Andrews, Martin Doherty, Mark D