Donaghmore Ashbourne took on Ballinlough in a Division 3B League game in Ballinlough on Wednesday 27th March 2019 under lights. On a lovely evening for a game both teams played football and it was a tight game with plenty of incident. The Moores came out winners when they inched their way back in added injury time to score two goals to seal the win. The injury time at the end was due to an unfortunate ankle injury sustained by the referee Martin Dawson 5 mins before the end of the game. Ably treated by the away team physio he was patched up and continued on bravely to finish out the game.
Ballinlough started the better of the two teams even after conceding the first score to the visitors, a point from Anthony McAlearney. They scored 5 points in total over a keenly contested half and would have been further ahead but for substitute goal keeper Matt Davis making an excellent block 2 mins from the end of the half. He replaced Terry Bruton after injury forced him off. Ballinlough were also unlucky with injuries when two of their players collided and suffered head injuries which necessitated a trip to hospital for one. The club wishes him a speedy recovery. Both teams were guilty of several wides but Donaghmore Ashbourne didn’t find their rhythm during the first half at all, but went in at the break only 3 points down after Luke Barrett pointed at the end of the half. Faolan Smith scored his first point after 32 minutes but Ballinlough hit back with 2 in the 35th and 36th minutes. Smith reduced the deficit with a pointed free on 37 minutes and Stephen Breslin added another on 40 minutes. Smith scored from play on 42 minutes but Ballinlough hung in and added a free on 44 minutes. Donaghmore Ashbourne were moving well but could not head the home team at all on the scoreboard. They earned another free a minute later with Smith again pointing it. Ballinlough doubled their lead again on 47 minutes with a free but the visitors hit back right away with sterling work from Anthony McAlearney earning him a point. Again Ballinlough added another point on 53 minutes but Chris brady cooly finished off a flowing move with a point a minute later. After a break for treatment for the ref Ballinlough scored another to leave two between them with 4 minutes left to play. Donaghmore Ashbourne dug in and after a turnover in midfield by Joe Magee they broke down the field and Faolan ended the move firing the ball to the net. This lifted the visitors and seemed to deflate the home team. Tenacious defending turned into swift break away and Smith again pointed a free to put the visitors 2 up. Fergal ‘Baby Heff’ who worked tirelessly all evening was rewarded when he raised a green flag for his team at the end to seal the win. The scoreline doesn’t reflect the story of the game as Donaghmore Ashbourne chased the game right to the end and eventually caught Ballinlough who battled bravely all evening. It was an excellent game played in the right spirit and both clubs should be proud of the manner, character and attitude of their players to the game.
Final Score: Ballinlough 0.11, Donaghmore Ashbourne 2.10
Donaghmore Ashbourne Team: Terry Bruton, Simon Purcell, Niall Moran, Oisin Mulhall, Luke Barrett (0-1), James Flavin, Liam Finn, Chris Brady (0-1), Joe Magee, Kevin McInerney, Stephen Breslin (0-1), Anthony McAlearney (0-2), Fergal Heffernan (1-0), Faolan Smith (1-5, 2f), Danny Deery.
Subs: Matt Davis for Bruton, David Donnelly for Deery, Pat Dennehy for Flavin. 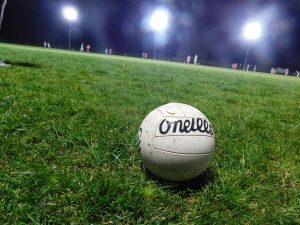 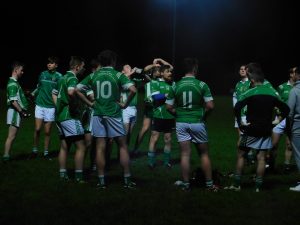