Donaghmore Ashbourne saw off the challenge of Gaeil Colmcille in this Division 1A match in Ashbourne, winning 1-16 to 1-08.

Playing with the wind the visitors struck first with a point after 2 minutes, Darragh McGovern pointed after 5 minutes to equalise. The Kells team replied in kind on 11 minutes but the home side had a lot of possession but had to wait till the 16th minute to score again Paul Gilligan equalising with a free. Shane Melia pointed within a minute and the visitors equalised on 18 minutes. Stephen Carton pointed a free on 20 minutes and an unlucky injury forced Padraig Durkan off replaced by Kevin Fenton in goal. Gaeil Colmcille found their rhythm and scored 4 points in a row until Stephen Carton pointed a free moved up for dissent in added time. Half time score Donaghmore Ashbourne 0-5 Gaeil Colmcille 0-7.
Donaghmore Ashbourne upped the pace in the second half with a volleyed goal from Colm O’Mealoid within a minute of the restart. The visitors scored a point on 34 minutes but using the wind advantage well, the home team had a free duly pointed by Paul Gilligan on 35 minutes. Gary Sweeney broke through to point on 37 minutes and Conor Carton added another on 42 minutes. Paul Gilligan scored a point on 44 minutes to put 4 points between the sides. As the game went on, the Kells sides discipline went with it and it became a stop start game punctuated by points from the home team. Paul Gilligan added another two scores with frees on 46 and 48 minutes. Shane Melia pointed on 49 minutes and James Crumlish pounced on a loose ball a minute later and added another point to the score board. Gary Sweeney scored a point on 55 minutes which seemed to deflate Gaeil Colmcille. They lost their discipline arguing with the referee and subsequently having a man sent off. Gilligan topped off a fine display with another point a minute later and newly introduced Leo Reilly scored his teams last point on 57 minutes. Kells had another man sent off a minute from time but still managed to score a goal with the time remaining to take the bare look off the score board.
Donaghmore Ashbourne will be happy with how they held their discipline in the heat of the game and when it mattered.
Final score Donaghmore Ashbourne 1-16, Gaeil Colmcille 1-08. 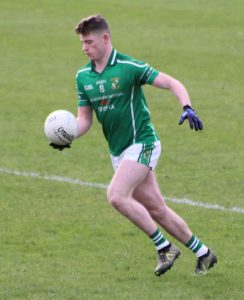