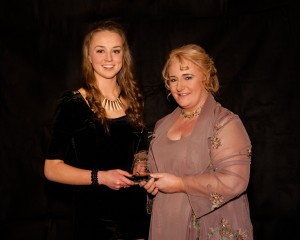 Donaghmore/Ashbourne player Aoibhin Cleary won the coveted Rising Star Award at the Meath ladies football presentation night, held at the Newgrange Hotel in Navan. This award was recognition for Aoibhin’s contribution to her club U-16, minor and Intermediate teams, and for her performances at inter county level. Aoibhin played at midfield for the Meath U-16 team, which reached the Leinster Final and she starred on the Meath minor team, which won the Leinster Championship. She also won a Leinster title with Ashbourne Community School and, to cap off a great year, she was selected to play on the post primary schools Leinster team.
Aoibhin is pictured receiving her award from Tracey Hamilton, Meath county vice chairperson.